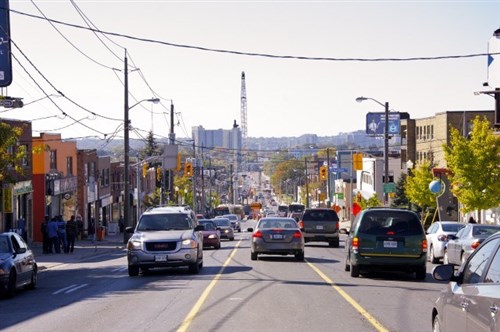 When the one-stop Scarborough subway is constructed, when the 407 East extension is built, or when the TransCanada Pipeline is routed, Canadians are forced to sell all or part of their property.

Every lawyer Torontoist spoke with, including the Ontario Expropriation Association’s president, described the decision to force a sale as “political.”

They also argued expropriation is often unavoidable because governments need to build transit infrastructure, and sometimes they need to bulldoze people’s homes or businesses to do it.

Owners and tenants of land being forcibly bought by a government body have rights, though not as many as they might like.

The most an owner can do is request an inquiry to discover if it’s actually necessary for the government to purchase their land or if it can be avoided.

But even if that inquiry recommends a government not expropriate, the government can force the owners to sell anyway.

The findings of the inquiry are never made public, though they are given to the owner and government organization in question.

There’s also a fair amount of room for getting more money from the compulsory sale than is originally offered.

Every “reasonable” legal expense determining the price of the home or business is reimbursed by the government, but hiring a lawyer to stop the government from buying the property in the first place is not. Choo Choo! TTC coming through The Eglinton LRT and Scarborough subway have both required expropriation of Torontonians’ land, and these projects are only the beginning of transit planned throughout Ontario.

Shane Rayman, an expropriation lawyer who’s taken cases to the Supreme Court of Canada, described expropriation as a necessary evil for necessary projects like public transit. He “doesn’t believe there will be a backlash” against City Hall over the construction of Toronto’s new subway and LRT lines.

But Bob Ackerman, also an expropriation lawyer, said that the powers that be have disregarded the rights and interests of property owners on many large projects.

One of his cases in Scarborough saw an entire business be forcibly bought by the City when it planned an LRT, and then it was given back to his client when Rob Ford and City Council decided Scarborough should have a subway.

It came at a significant cost to the city, said Ackerman, who believes many expropriated businesses affected by Toronto’s transit projects may seek a legal battle. Getting the best bang for your buyout Before the City of Toronto, the Ministry of Transportation, or any government flexes its muscles, it asks landowners to voluntarily sell.

Most expropriation is for only a portion of a property, and many legal challenges involve disputes over the money being offered.

Ackerman said owners will get more money “100 per cent of the time” if they hold out on the initial offer and force the government’s hand to expropriate.

Ackerman cited a case in Innisfil, Ontario, where part of his client’s property was being turned into a GO parking lot. The client received over $1 million after originally being offered $200,000.

“That was a situation where the authority was really trying to intimidate the property owner,” Ackerman said.

However, the government or authority will sometimes offer what they know will end up being the price tag after expropriation, said Matthew Owen-King, president of the Ontario Expropriation Association.

That gives the owner no financial incentive to force the government’s hand. In search of fairness and to be made whole All three of the lawyers who spoke with Torontoist represent both owners and governments, and all three believed the system meaningfully strived to make owners whole in a fair process.

That said, there is modest momentum to reform what Ackerman described as “the ultimate exercise of power” by “Authority with a capital ‘A’.”

Owen-King said the OEA is drafting recommendations to open up its peculiarly closed inquiry process, examine whether the inquiry should have teeth, and probe the possibility of covering legal expenses of owners who challenge the expropriation.

The OEA plans to present these recommendations to Ontario’s attorney general in the fall of 2017, though Owen-King said he didn’t know if there’s any political will for change.

The only political will Shane Rayman is aware of is to abolish the inquiry process altogether, he said.

Rayman points to the high cost of giving property owners the right to challenge a forced buyout as a disincentive for governments to maintain the inquiry process, adding that if political forces abuse their power, they should be held to account in an election.

To view this article on the TORONTOIST: